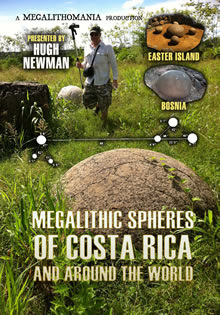 This video is the first part of a small series on the megalithic spheres of Costa Rica. This one focuses on the Museums and Parks of San Jose. Hugh recently travelled to Costa Rica to explore the enigmatic stone spheres that have been discovered there over the last century. Ranging from the size of footballs to 9ft in diameter, and often perfectly carved, these spheres have left archaeologists and researchers baffled as to who built them, how and why. The opening scene of 'Raiders of the Lost Ark' showed Indiana Jones running down a tunnel to escape from one of them, but rather than a booby-trap set by the ancients, it has been revealed that these may have been more to do with geomancy, navigation, alignments and astronomy. Over the next few episodes, Hugh will look at other similar spheres that have been discovered in southern Costa Rica and around the world and give an historical overview of the strange 'marbles of the gods' (as David Hatcher Childress named them). See his full DVD lecture about Costa Rica: www.megalithomania.co.uk/2013-hugh-newman-megalithic-spheres.html
Posted by Hugh Newman at 9:58 AM

Hugh Newman
Hugh Newman is an earth mysteries and megalithic science researcher. He organises the Megalithomania Conferences, tours and meet-ups in Glastonbury, UK, North America, Peru, Egypt, Mexico and South Africa. His most recent book, Earth Grids has been published by Wooden Books. He has spoken at conferences in the UK, Malta, France, Peru, Bosnia, and North America. He has appeared on BBC TV, Sky Channel 200 and on History Channel’s “Ancient Aliens” in the last three seasons. He has articles published in The Leyhunter (UK), World Explorers Magazine (US), The Circular (UK), Mindscape Magazine (UK) and Northern Earth (UK). He is currently writing a book about the Wandlebury complex near Cambridge, UK, and getting ready to explore Turkey, Wales, ancient England, Italy, then on to Peru and Bolivia in November.